The Prime Minister has written to me 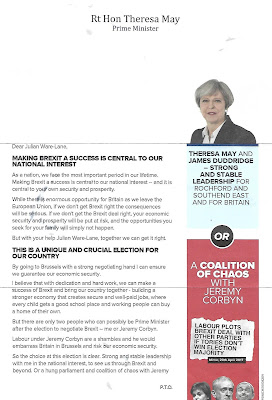 Through my letter box a couple of days ago.

Do I trust the Tories on Brexit? No I do not.

From what we have seen of negotiations so far, the Tories are not going to get a good deal.

For a Brexit that works for working peope we need a Labour Government.

The PM has shown already that she puts political opportunism above everything when she called this General Election, in spite of the Fixed Term Parliament Act.

Labour has the vision, Labour's manifesto has been well received. In the meantime the Tories are seeing their poll leads shrink.