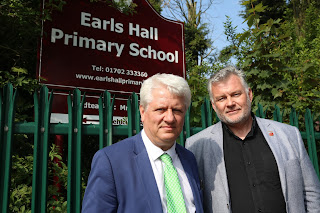 Labour’s candidate in Southend West, Julian Ware-Lane, has welcomed the announcement that a future Labour government would fund improvements to schools’ budgets.

This will be funded from corporation tax. Labour is pledged to increase spending on schools by £4.8bn a year to keep up with rising costs and a further £335m so no school loses from the Tory’s funding overhaul.

Last month, Jeremy Corbyn said, “The National Audit Office confirms that schools are facing a cut of three billion pounds in real terms by 2020, the first real terms cut in education budgets in a generation.”

Conservative MP, Sir David Amess, conceded that the government’s funding formula “would be likely to have a devastating impact on every school in Southend West.”  As Julian points out, “Sir David is now out campaigning to have a Tory government re-elected that he knows will have a ‘devastating impact’ on the children in his own constituency.”

Julian Ware-Lane echoed Mr Corbyn’s concern about children being “crammed in classes like sardines,” the shortage of teaching resources, and that due to the shortage of qualified teachers it was necessary to recruit around 5,000 teachers from other EU countries last year. “It is these same teachers” said Julian, “that Theresa May is using as bargaining chips in her megaphone diplomacy with the European Union.

The British Chamber of Commerce is “committed to bridging the gap between business and education, by increasing collaboration between the business community and education providers, to improve young people’s transition to work.” “British business should indeed play its part,” said Julian Ware-Lane. “British industry enjoys one of the lowest rates of corporation tax in the developed world, it is right and proper the next Labour government should fund improvements to education in this way, rather than cutting corporation tax even further as the Tories propose.”
at May 11, 2017