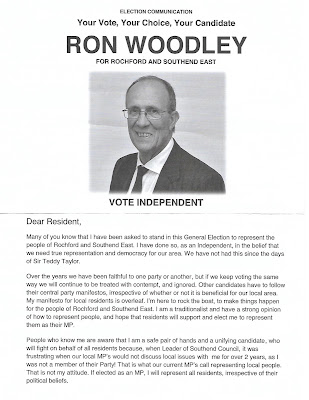 When I heard that Ron Woodley was throwing his hat into the ring for the General Election my first thought was to wonder whether he would keep his deposit.  If nothing  else, independents have not fared well in national elections in this part of the world.

My second thought was to wonder why he was standing. I do not believe he can get anywhere near winning, so is a different agenda at play here? Or perhaps he really does think he can win.

I have had conversations with Ron where he has tried to convince me that he has socialist credentials, then in the short order he has stood up in a council meeting and declared he is the only true conservative present. If nothing else, he is confused in his politics.

His is the spoiler candidacy, one designed less to win than to create a stir of sorts. The problem is , I am not really sure what he wants to create a stir about.  I am grateful that he has come out in support of NHS services in Southend, but that fight is best waged by backing the Labour candidate.
at May 28, 2017

Email ThisBlogThis!Share to TwitterShare to FacebookShare to Pinterest
Labels: Rochford and Southend East