Another visit to Westcliff Ladies RFC 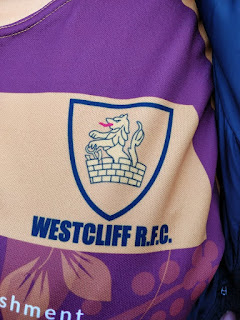 On Sunday I went to see my second game of ladies rugby union. This turned out a comfortable win for Westcliff Ladies, beating Dartfordians 61 – 10.

It began evenly, and was tied 5 - 5 after a quarter of an hour. Then Westcliff got into their stride and the tries came aplenty. 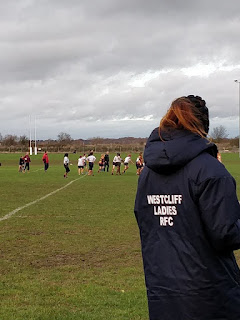 It was an enjoyable match to watch, especially with a daughter scoring a try, and two nieces also on the field. If the ladies had kicked better the score would have been even more impressive. As it was, in their first season this is to date their biggest win. 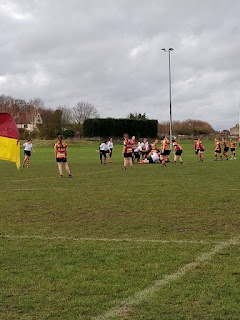 Afterwards, in the clubhouse, they, most touchingly, dedicated their victory to me. This as acknowledgement of my health issues, my being there was an achievement itself. I hope to go again, and soon.
at December 05, 2018 No comments:

This church has stood empty for a long time, and I cautiously welcome it being brought back into use. But I do have concerns and I want to ensure that any work that is carried out is sympathetic to the nature of this heritage asset.

I wonder whether one visitor parking space is enough, especially as this building sits in an area with some parking issues, and is adjacent to resident parking schemes.

As is so often the case, the local ruling administration is yet again shutting the barn door after the horse has bolted. They applaud themselves for their lame response to issues affecting Southend’s town centre, yet it is again a story of too little, too late.

The town centre is approaching crisis. (Some will claim it hit crisis some time ago, a point I am not going to dispute.) High streets up and down the land are suffering, yet some buck the trend. Even within the borough there is example of a high street that remains buoyant – look at Leigh-on-Sea.

The Tory administration took a closed shop approach to the idea of a High Street summit; I, and my colleagues, decided this was entirely the wrong approach. If nothing else, how can the people who have overseen its decline be best placed to reverse this?

There are many reasons for the current state of our town centre. It is not all down to the rise of internet shopping, or indeed those current scapegoats – the homeless.

What struck me is that we need fresh ideas and must engage with and listen to our residents. The ‘we-know-best’ attitude of the Tories is not only arrogant, it clearly flies in defiance of reality.

The Tories do not listen. Their great solution is to cajole and bully the homeless to move from the relative safety of shop doors, which solves nothing, merely moving the problem. When will they understand that failure to properly address the failures of austerity and the paucity of social housing has left the fifth richest nation on Earth with increasing numbers sleeping rough.

Fortunately Labour did take a cross-party approach to its people’s summit, and the more than seventy residents have gave up a Wednesday evening to air their views about their community were listened to politely. Labour (and I am sure the Liberal Democrats and the Independent Group) will be looking at their notes from this meeting and will be trying to effect real and positive change.
In the meantime the Tories will be re-arranging the deck-chairs as their ship heads towards an ice-berg. Not listening is a very bad idea.
at November 30, 2018 No comments:


Cllr Julian Ware-Lane has joined 805 councillors who have signed an open letter opposing government proposals to allow fracking companies to undertake exploratory drilling without local planning applications.
Southend-on-Sea, UK - Councillor Ware-Lane has signed an open letter calling for the withdrawal of proposals that treat exploratory drilling by fracking companies as ‘permitted development’, and to respect the rights of communities to make decisions on shale gas activities through the local planning system.
The government is proposing that exploratory drilling for shale gas should be granted planning permission through a permitted development right. This right means fracking companies don’t need to apply for planning permission from the local authority. Permitted development is a category of planning originally designed to facilitate minor structural changes to homes such as extensions and putting up sheds.
Councillor Ware-Lane, Southend-on-Sea Borough Council Milton ward, said:
“I believe it is essential that local people should have the final say over exploratory drilling by fracking companies in our community. These proposals by-pass local democracy and risk industrialising large sections of countryside with a hugely unpopular industry that brings noise, pollution and community division. We should not be changing the planning system to facilitate fracking, but instead supporting climate and community friendly energy sources. Local voices should be heard.”
The government consultation closed on October 25th and has prompted hundreds of Councillors to express concern. The letter - sent to the Secretaries of State for Housing, Communities and Local Government, and Business, Energy and Industrial Strategy, James Brokenshire MP and Greg Clark MP - has also been signed by MPs, Parish Councillors, and London Assembly Members.
40 Councils have also formally opposed the government's plans, including the Conservative controlled Nottinghamshire, Surrey and Kent County Councils. More than 20 Conservative MPs have threatened to rebel against the government over these proposals.

Sebastian Kelly, Fracking Organiser at 350.org commented:
“These proposals represent a desperate attempt to force a failing industry onto communities. Local people understand the risks posed by fracking to their community, countryside and the climate, and must be able to influence the planning process to express these concerns. The Government must listen to the growing concerns from locals, Councillors and MPs and immediately drop these undemocratic and reckless proposals.”
Caroline Jones, Friends of the Earth Campaigner added:
“It’s absurd that planning rules originally designed for minor home improvements, like putting up a garden shed, could now be used for major drilling infrastructure. Our countryside and our climate are at serious risk if the government pushes ahead with these plans. We need to be moving away from fossil fuels, not make it easier for companies to dig up more.”
More than 300,000 people have also signed petitions against the proposals [6] and 20 organisations, including the RSPB and CPRE, have warned that opening the door to fracking companies risks negatively impacting on local democracy, the tranquility of the countryside and climate change.
Text of the open letter available here: https://gofossilfree.org/uk/let-communities-decide-letter/. Full list of 850 signatories is available here including 805 Councillors, 11 MPs and 34 Other (Parish Councillors and Assembly Members).
at November 22, 2018 No comments: