The Full Council meeting of October 20th, 2016, had an item on the Southend Central Area Action Plan (SCAAP).

Minute 329 (SCAAP) from the agenda and pack included this:

"On consideration of the report the Corporate Director for Place confirmed that, outside of the SCAAP process, it was the intention to develop a parking strategy and a tourism strategy for submission to a future meeting of the Cabinet".

This was of sufficient concern for the Labour Group that they unanimously voted against accepting the SCAAP. Labour believes that an incomplete SCAAP cannot be presented to the public or the Government inspectors. How can the public be expected to comment on a document with such large holes in it?

Deputy Leader of the Labour Group, Cllr Julian Ware-Lane, said: "This borough has historically had a number of part implemented plans - I hope the SCAAP does not follow this unfortunate trend. Since parking and tourism are huge issues for the town centre, how can we be asked to endorse this without detail in the interim?"

Cllr Ian Gilbert, Labour Group Leader added: " "There were, in our view, sufficient unanswered questions in relation to this document to merit going back and having another look at it. It would seem sensible to wait for the outcome of the parking and tourism review before passing this critically important planning policy. Although the Tories and UKIP hide behind the fact that it will be subject to statutory consultation, the fact is they have voted to make this document the official policy of the council, and they must take responsibility for that."

The vote on sending the SCAAP back to Cabinet was defeated with all of the Conservative and UKIP groups voting to support the document as it is.

The promised consultation process is undefined at the moment.
at October 30, 2016 No comments: Links to this post 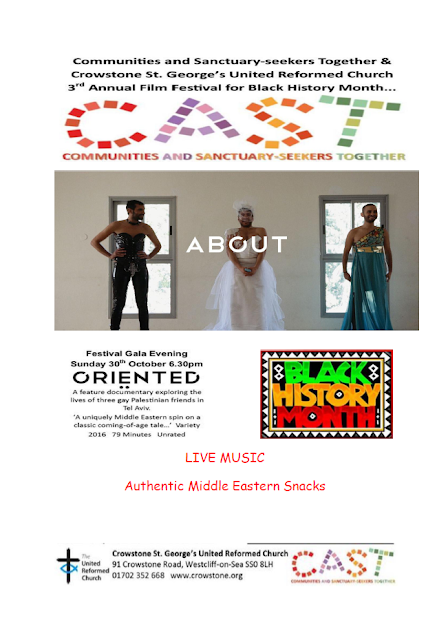 This Sunday (30th) will be the final date for the 3rd Annual Film Festival for Black History Month. The film is called Oriented and is a feature documentary exploring the lives of three gay Palestinian friends in Tel Aviv.  It will be shown at 6.30pm at Crowstone St Georges .
at October 26, 2016 No comments: Links to this post

September's local authority elections present a mixed picture for Labour. Whilst they are some way from being a representative sample, it does give some indication of our popularity. Of course, every election is an individual story, but trends can be spotted.

In summary September looked like a good month for the Liberal Democrats, a poor month for the Tories, and an indifferent one for Labour.
at October 24, 2016 No comments: Links to this post