Southend Labour demand a Minimum Wage of £10 an hour 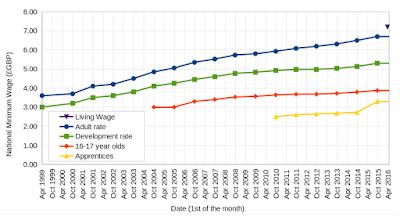 Despite cross party support for a minimum wage the Resolution Foundation calculate that, when cost of living increases are taken into account, the current minimum wage now stands £1,010 lower per year than it was in 2008. This truly shocking statistic is a consequence of the recession and a succession of austerity policies by Tory governments, which have dramatically reduced the real value of the minimum wage.

As Labour Councillor Helen McDonald points out: “the reduction in the value of the minimum wage has had a particularly acute effect on people living in Southend. The national minimum wage is a rate that applies across the country but housing costs have risen faster in London and the Southeast than elsewhere in the country.”

The Labour Party introduced the legislation for a minimum wage in 1998, which took effect from April 1, 1999 with a rate being set at £3.60 per hour for adult workers. This rate has increased incrementally each year and now stands at £7.50. The change in the law was initially opposed by the Conservative Party, but in 2005 David Cameron conceded that “I think the minimum wage has been a success, yes. It turned out much better than most people expected including the CBI.”

Southend Labour Party fully supports the recent announcement that a future Labour government will increase the National Minimum Wage to £10 per hour for adults over 25 years of age by 2020. With around 1 million people on the minimum rate, and further 1 million workers earning within 50 pence of this figure, Labour’s policy could increase the wages of around 5 million people over the next three years.

Cllr McDonald added: “we are heartened to learn of Jeremy Corbyn’s proposal to increase the National Minimum Wage to £10 an hour for adults, with increases for those below 25 years.”

“We need a Labour Government to restore the value of the national minimum wage and reverse the austerity policies of this Tory Government.”