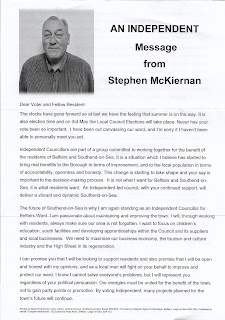 Belfairs ward has had some interesting results in the past, including a dead-heat where the Conservative candidate won out over the Liberal Democrat by the toss of a coin.

It has been an all-Conservative affair in recent years, notwithstanding Stephen Aylen, who is the sole Independent councilor in Belfairs (and west Southend). He was elected as a Conservative, and doubtless still attracts Conservative support come election time.