More Tory spin on the NHS, but it will fool no-one 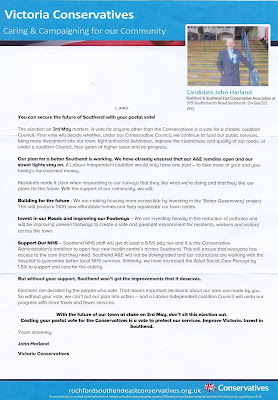 Local Conservatives claims on the NHS are risible. It is a Conservative Government that is forcing deep cuts into essential services. Of course, local Tory candidates are worried because residents can see that their cherished hospital is in crisis.

The maintenance of A&E in Southend-on-Sea is not down to Conservative campaigning - they have largely ignored and argued against those of us who have campaigned. It is down to people like me who have used whatever platforms we have to highlight the real issues with our National Health Service.

The Conservatives have little chance of success in Victoria ward. They last won Victoria in 2000, under the old boundaries. They have not won the ward in its current configuration.

In 2016 the Conservative candidate attracted 15.35 of the vote, as opposed to 54.7% for Labour. However, we should not allow complacency to creep in. Make sure you vote for Margaret Borton on May 3rd (or before if you have a postal vote).
at April 20, 2018