Here is a press release:

On Sunday 22nd January 2017, Nancy Smith of Dementia Action Alliance gave a presentation to Southend Labour, to raise awareness of dementia and to encourage participants to turn that awareness into action. The event followed on from Essex Dementia Day on Friday 20th January 2017, as part of a scheme to help build dementia friendly communities across Essex. The session informed Labour members about what it’s like to live with dementia, and how they can help those affected by dementia at home and in the community. 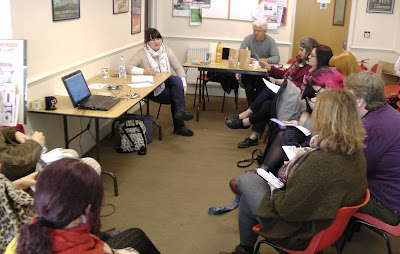 As a result of taking part in the session, every participant became a Dementia Friend and earned an identifying ‘forget-me-not’ Dementia Friends badge. Southend Labour joined over 4,000 other Dementia Friends in Southend, and is keen to encourage other organisations to get involved.

Ashleigh Condon, Secretary of Southend Labour Local Campaign Forum, organised the event and was delighted to help increase participation in this initiative: “When I met Nancy and saw how passionate she was about dementia awareness, I knew we needed to hold a session for Labour members. The session was good fun, highly informative, and took just an hour to do. We can now proudly join other bodies, such as Southend Airport, in being a dementia friendly organisation”.

For more information about Dementia Friends, and to join in a session near you, visit DementiaFriends.org.uk
at January 23, 2017