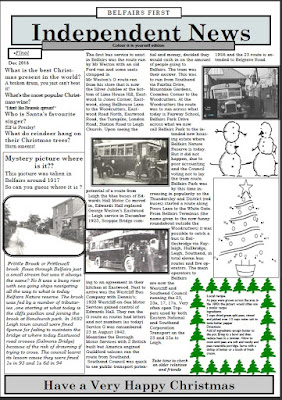 It appears a quiet time of the year as regards to political leaflets; I know Labour are putting stuff out, but have seen little evidence that other parties are doing likewise. Maybe I just live in an area where only Labour can be bothered; perhaps elsewhere it is a story of activists of all persuasions doing their bit.

Certainly, in Victoria ward (where I live) I have seen nothing from any opposition party or candidates.

Belfairs' Independent , Cllr Stephen Aylen, is busy putting stuff out. This leaflet is what he distributed in the run-up to Christmas.  His is a peculiar creation, which leads on the bus services into his ward.

Cllr Aylen sits on his own in the chamber, a former Conservative and Independent Group member he now ploughs a lone furrow. He certainly has tried to oust the two current Conservative councillors, replacing them with more independents. If he succeeds will we see a third independent-type group in the chamber?
at January 13, 2017