Oh dear! Southend Tory Candidate only prepared to support grammar schools (and no other)

So, it’s official, Southend’s Tories are only interested in the borough’s grammar schools. Quite what the many other schools in the borough will think about this is not known, and is likely unprintable in many instances anyway. 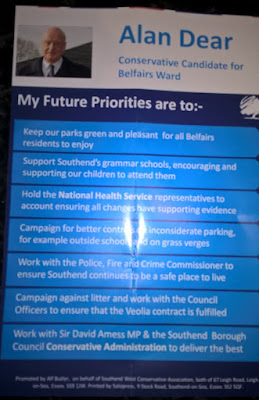 Conservative leaflets in Southend are often poor, but ‘dire’ is the only way to describe what I have seen recently.

Alan Dear’s “Future Priorities” are woolly to say the least, although he is quite explicit in his fondness for the four grammar schools and his failure to equally endorse the borough’s other schools. His ward, Belfairs, includes one of the ignored schools (more if you include junior schools).

My views on segregated education are well-known and oft stated, but this does not stop me supporting all schools of all types. I want every child to have a good education, clearly something that Mr Dear does not agree with.

As to his future priorities – what of his current priorities? It is a rather curious strap-line to say the least.

Although I have not seen an announcement, this leaflet does confirm that Cllr Mo Butler will not be seeking a second term. Whether she was de-selected, or just got fed up with being in the chamber with the bigots in her party, is not known to me.