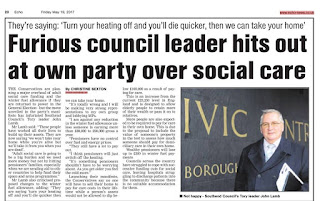 Labour’s candidate in Southend West, Julian Ware-Lane, finds himself in the unusual position of standing in agreement with the leader of the Conservative group on Southend Council, John Lamb.

Mr. Lamb wrote to the Southend Echo after the Tory manifesto was published,  castigating his own party over their proposed changes to the way that social care is paid in old age. He said: “These people have worked all their lives to build up their assets. The Conservative Party is now saying ‘we won’t take your home while you’re alive, but we’ll take it from you when you are dead.”

Mr. Ware-Lane also concurs with Councillor Lamb on the changes proposed by the Tories to winter fuel payments. Councillor Lamb takes the view that, “they are saying ‘turn your heating off and you’ll die quicker, then we can take your home.”

Julian says, “This just shows how completely out of touch the Tory Party is with ordinary people, and even some of its own councillors. They are taking the older vote for granted. We have said we will keep the ‘triple lock’ on the State pension, redress the injustice done to the WASPI women who had their retirement age changed, and maintain the winter fuel payment as a universal benefit. We are also proposing to add £8bn to the social care budget over the lifetime of the next parliament.”