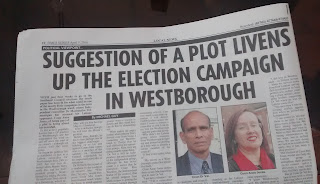 It clearly comes as a surprise to some, but the Labour Party is trying to win elections. Yes, we are trying to beat our opponents and have our candidates selected.

In Southend-on-Sea the Labour Group on the Council currently numbers nine. Some think Labour's plans to increase that number amounts to a plot.

So, by dastardly scheme we, the local Labour Party, have put a candidate up in Westborough who is going to attempt to win.

But hang on, didn't we also do that last year. Ah yes, another plot! Oh, and in previous years too - clearly an underhand attempt to give the electorate some choice!

We have candidates standing in every ward, as we always do. We are also encouraging voters to choose their Labour candidates in preference to whoever else is standing.

Some excitable persons may describe this as a plot, I rather think 'democracy' is more apt appellation.
at April 08, 2016