The Labour Party is concerned about the new Housing Benefit rules which come into force on April 1st, and how this will adversely affect local unemployed people aged 18 to 21 years old. After this date some could find themselves made homeless or put into serious financial difficulties as their housing benefit is slashed or removed completely.
Councillor Ian Gilbert said: “these benefit cuts, brought in by a Conservative Government, will have serious consequences for young people living in Southend Borough. We already have far too many vulnerable people relying on charities and food banks, and this situation will only get worse when young people can no longer apply for housing benefit.”

On Monday 6th March 2017, Cllr Gilbert visited the Storehouse in Coleman Street, to see for himself how they are coping with the demand for their services. Only a week ago there were anxious requests for more donations of food and other items, as photographs of empty shelves highlighted how items were being distributed faster than the incoming donations were replenishing stocks. 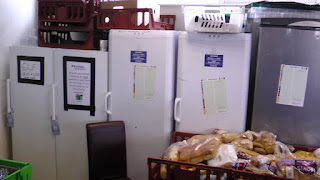 It was only through the good will of local companies that donations were increased and a disaster averted. Every week at least 120 people rely on food they receive at the Storehouse, and while Cllr Gilbert was there he saw lunch being served to those who had queued outside to get a hot meal.

A variety of people regularly visit the Storehouse and this not only includes the homeless, but also unemployed and those on low wages who cannot afford to live on their income. There are refrigerators for the perishable items and visitors can also obtain essential items such as toilet rolls, baby’s disposable nappies and even bottles of drinking water.

The Storehouse was featured last month on Jamie and Jimmy’s Friday Night Feast and one of Jamie’s Community Fridges is installed in the building. The staff are sensitive to the needs of the people who use the facilities, and there are supplies of clothing and a hot shower can be provided to those who have no other opportunity to find one. There is even equipment for basic health checks such as blood pressure monitoring, and the staff do all they can to provide the help that their customers seek.

In praise of the work being done by the Storehouse, Cllr Gilbert said: “I am very impressed by the difference they are making to people’s lives, and this facility has become an essential service in the centre of our town. However, it saddens me that, in 2017, we have reached a situation where we rely on the voluntary sector to provide basic support for a considerable number of the poorest in our population. Britain is one of the richest countries in the world, but the Government’s austerity policies are adding to the burden of the poor and those who do such tremendous work, as the Storehouse does.”