Customers of the Post Office in Rectory Grove, Leigh-on-Sea, are becoming increasingly upset and angry that their branch is to be closed, and they are preparing to show their feelings this coming Saturday. Members of the postal workers union, the CWU, Southend’s Trades Union Council and the local Labour Party have joined forces to organise a campaign outside the branch between 10:00 am and 12:00 noon on 11th February. 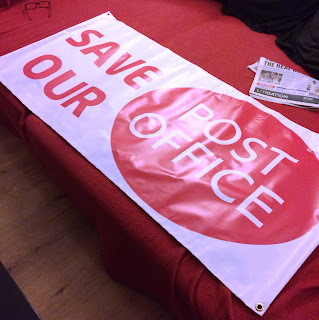 During the rally local residents and customers of this branch will have the chance to sign a petition and discuss their concerns about what closure will mean for them. Several Southend Labour Councillors have expressed their concern and will be present at this rally.

As in other cases, where large organisations make decisions that affect ordinary lives, many local Leigh people feel powerless to have their say about what will happen next, as the Post Office has not consulted them over the future of their branch. However, it is possible to complain to the local MP and Councillors, and questions can be put to the PO's Communications and Corporate Affairs Team - Laura.tarling@ postoffice.co.uk

To make this event more unique there will be a Lightning Demo for 2 minutes at 12:00 noon, when as many people as possible will be able to join together for a mass photo to show our opposition to this proposed closure.

A special banner has been produced with the slogan: “Save Our Post Office”, and this will be on display on Saturday. A Facebook Page was set up on 30th January to publicise this campaign and by 7th February it already had 479 “likes” with growing support every day. https://www.facebook.com/saveleighpo/
at February 08, 2017