Southend Labour ran a training session on Saturday afternoon, 28th January 2017, upstairs at O'Neill's pub. Around 30 members and supporters listened as Labour Councillors gave their views on how to become more active in the local Labour Party. There was also plenty of time available for questions and answers to fill in the details about just how we do that. 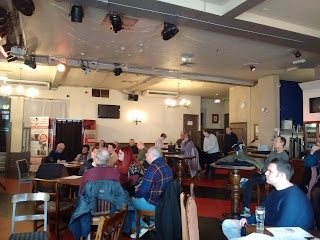 Cllr Julian Ware-Lane opened the event by explaining why it was necessary to focus on the issues to be discussed and he then introduced each speaker to the stage. Many thanks to the excellent sound system at O'Neill's all present could hear every word!

Campaigning and activism was the topic chosen by Cllr Kevin Robinson, and he used his experiences of past elections and campaigns to encourage everyone to get involved in whatever way they can to help in future, even if that is only to put a Labour poster in their window. There is a whole range of tasks that activists can get involved in, including distributing leaflets, canvassing, and participating in on-line social media.

In UK political parties women are often outnumbered by men, as in the House of Commons, and Cllr Anne Jones stressed the point that this has to change. Cllr Jones described her own life and what it is like from a woman’s perspective in British politics. The Labour Party has a principle that it will ensure gender equality within its own organisation and this must be rolled out to the country at large.

Southend Labour’s newest Councillor is Cllr Helen McDonald, who was elected in May 2016 to represent Kursaal Ward. Cllr McDonald described how she had to quickly learn what it meant to be a Councillor and the type of activities that this involved. To test our knowledge Cllr McDonald asked the audience to spend 5 minutes trying to write down what they thought a Councillor was responsible for, and this led to a discussion about the amount of work involved.

Finally Cllr Charles Willis talked about the local Labour Party organisation and politics in Southend. The party not only comprises a structure that has officers at Constituency level, but also at the more local level there are branches that operate at the Ward level. Members are encouraged to participate in meetings and to get involved with the local campaigns and policies that are discussed.

Those present had an inspiring afternoon, and enjoyed a buffet meal during the break. There was also a quiz, with prizes, to test the knowledge about past Prime Ministers, geography, history and politics.

There will be further training sessions like this in future and all members are encouraged to become activists, candidates, councillors.

Julian said: "The feedback on the day was very positive and I believe we have unearthed a few more activists. This was meant to be both a fun and educational event, and I think we achieved that."

He added: "That there are people coming forward who want to engage with their community is good news for Southend-on-Sea."
at January 30, 2017