Excuse me sir, can I count on your support? 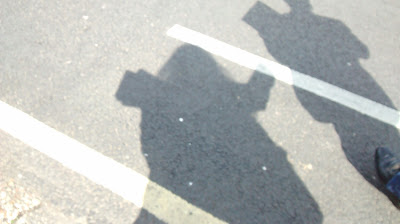 The weather was good, very good. Campaigning when it is warm is a joyous experience. Thus we had a gay old time, speaking to residents and finding out what their voting intentions were.

Milton is a marginal. I won in 2012 with a 68 vote majority. The Tories held it last year by 51 votes.  That marginal status is reinforced with every doorstep session. However, what is evident is that there are many who are undecided as to who they will support on May 5th, and many more who are likely to not vote. Turnout in local elections is often below 30%, and the coincidence of the Police and crime Commissioner election is unlikely to induce many to make a trip to the polling station.

What is clear, though, is that the impending referendum on Britain's membership of the European Union is having an effect. I am an unequivocal supporter for Britain remaining in the club, but quite how this should make any difference to someone casting their vote in local elections perplexes me.

I am yet to see a full list of runners and riders in Milton, and I am yet to be a confirmed candidate (my papers are signed but as yet undelivered), so I am not certain who is standing. Obviously the Tories will have a candidate, as will the Greens. An Independent is promised too. However, both the Liberal Democrats and UKIP have no real presence in the ward, although this does not mean they will stand someone. It could be a choice of six.

Based on work in the ward Labour should win by a country mile. Based on canvassing returns we are still ahead. However, I am expecting a tight contest.

I believe Labour has the biggest team in the ward too, and I am certain that it is only Labour who turn up all year round, as opposed to showing their faces just as the elections come into view.

I hope I am given another turn by Milton's electorate, and it certainly has been a privilege to be a councillor for this ward. Whatever happens I am determined to enjoy the short campaign.

One thing was noticeable in my latest session, you can dress like a radical yet still behave like a reactionary; not everyone has either the wit or will to engage. Some people really ought to get out more often.
at April 04, 2016