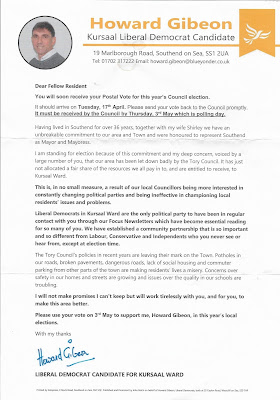 The Liberal Democrats are unlikely to win in Kursaal. Their record in recent years is of dismal failure, with candidates not really trying to be anything other than just a presence on the ballot paper.

This time around they appear to chosen a candidate who at least is trying to make an impression.
Howard Gibeon has, to this observer anyway, been the most industrious Lib Dem to have stood in Kursaal for quite some time. His campaign should raise the Liberal Democrats' profile in Kursaal (and their profile in the east of the borough is pitiable). Whether Mr Gibeon can actually win we will soon find out, but if he was successful it would be an enormous shock of a result.

Mr Gibeon’s will finish at least third, which will be his party’s best result in fifteen years. How, third place finishes for his party only come about as a result of having only three candidates on the ballot paper. So last place is usually where they finish in Kursaal ward, and this is what they should expect this year.