I present: the Tories new friends in Southend-on-Sea

The Green Party are only attempting to unseat one Tory this year, in Belfairs ward; everywhere else they are standing it is non-Tories that are trying to get re-elected.

For some reason the Greens in Southend-on-Sea have decided not to trouble the Conservatives, which suggests some sort of pact. Vote Green get blue was never truer. Their agenda is to stop Labour, the Liberal Democrats and members of the Independent Group Party from getting elected. It is a strategy designed to maintain John Lamb as Leader of the Council. 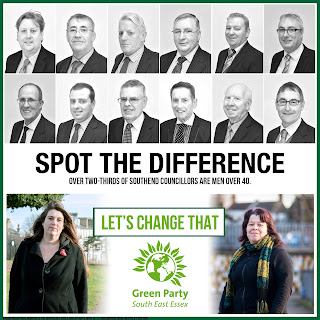 The Greens are also pretending that gender balance is a priority for them. This is a lie; their election strategy is to unseat three female councillors – see this table.


The Green vote here (in Southend-on-Sea) is a spoiler vote; they have only once managed to break the 5% barrier (2015 they got 7%). However, in a tight contest they can damage the progressive vote enough to secure Tory success.