Garry Lowen is the latest in a long line of Milton Conservative hopefuls, although he seems 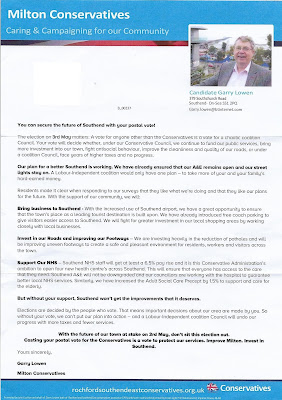 somewhat less active than many of his predecessors. Aside from the General Election year of 2015, Milton ward has been a miserable experience for the Conservatives since 2012 – so miserable that no-one has attempted a second go at it. Mr Lowen may be tempted next year if he fails in May – only time will tell.

Mr Lowen’s largely invisible campaign has not deterred him from claiming all sorts things, including Conservative support for the NHS. Ha ha ha! Look at the statistics – the NHS is struggling in Conservative hands (it always does).

Under his party’s watch Milton ward is becoming steadily more dangerous, and not surprisingly Mr Lowen does not mention his party’s woeful record on law and order.

As for the state of the roads and pavements - just walk around the borough and see just how wonderful they are.

If you want another Conservative councilor who does nothing then go ahead and vote for Garry Lowen, otherwise vote for the hard-working current councilor, Cheryl Nevin.
at April 16, 2018