Not only is Southend's pier a major landmark, it most readily defines the town when describing it to others. It is a much neglected icon, a symbol of both the town in its heyday, and of the neglect that both it and the town has had to endure over the years. 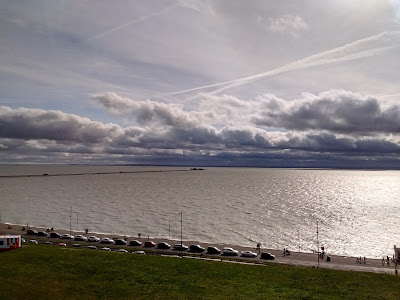 This Victorian wonder must have presaged wondrous things to come in the minds of those who dreamt it up. One cannot but think that a measure of disappointment would visit them if they could but be brought back to life to see what has become of the structure and the town that is its home.

Many can recall all sorts of amusements at both ends of the pier, and the tiered decking at the sea end that was home to food outlets as well as a pub.

It is 41 years since the great pier fire, and not much in reality has been done in the intervening years to bring the world's longest pleasure pier back to anything resembling its magnificent former glory. Money is promised to repair  the pier so that it remains intact, and does not fall apart from neglect. Whether schemes to really and radically improve the tourist offer come to anything remain to be seen. Southend Labour is committed to the pier and wants it to remain Southend's premier attraction.

Southend-on-Sea is a Victorian and Edwardian seaside town, booming in its formative years. Southend Labour are keen to modernise the town and its pier, whilst retaining the best of the heritage we have inherited. We have a wonderful natural resource in our long foreshore, and the pier bisects this, offering a voyage into the Thames. This much-love amenity must be made wonderful again - the town and its residents deserve it.

We must also cherish the heritage that is abundant; the town's many conservation areas should be enhanced and advertised because there really is so much to admire. Admittedly there is neglect, but with the will to improve and tidy up much can be done without the need for a vast outlay of money.

Let's have some real investment, with schemes that can and will transform the pier. No more half-baked ideas that drain both resources and reserves of goodwill.
at March 04, 2017

Email ThisBlogThis!Share to TwitterShare to FacebookShare to Pinterest
Labels: Southend-on-Sea