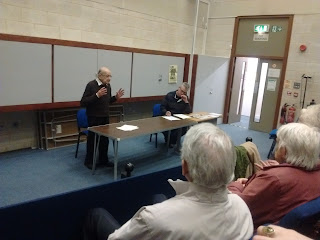 Last night, after a brief Full Council that ratified Alison Griffin's appointment as Southend's new Town Clerk, I moved a couple of hundred yards southwards to the Beecroft Gallery to take part in an Open Planning Meeting: Save Our A&E - No NHS Cuts. There was more than fifty of us there, which is quite impressive when compared to many local  meetings that I have gone to over the years. The more than fifty (I actually think it was fifty-four, but I could easily have missed one or two) included three Borough Councillors (McDonald, Robinson, Ware-Lane) - all Labour.

The meeting was chaired by Tim Sneller, and Norman Traub was the principal speaker. Plenty spoke of their concerns for the future of healthcare in south Essex, and many ideas came forward as to how we could publicise what is going on, and campaign to protect our precious NHS.

This is not a Labour Party campaign, but a campaign supported by Southend Labour as well as many who have no link to the Labour Party. I saw Green Party activists and NHS workers, and many faces I did not recognise. This issue is too important to be monopolised by Labour, but it is important that Labour people take part and voice their concerns.
at March 22, 2017

Email ThisBlogThis!Share to TwitterShare to FacebookShare to Pinterest
Labels: Open Planning Meeting: Save Our A&E - No NHS Cuts