I rarely read the commens under news articles in the Southend Echo - it seems to be a place for mostly keyboard warriors with decidely odd idas, and no appetite for research.

I get the occasional bit of stick, and I mostly smile at the banality of it all. I can take that many disagree with my views, completely gettig it wrong as regards to my involvement with the community and getting things done sometimes is a little harder to ignore.

Here are some comments from a recent article. Perhaps I should correct a few terminological inexactitudes. 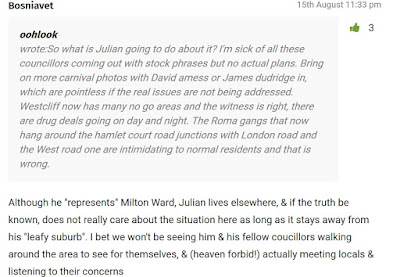 I do represent Milton and do not live there. I live about one hundred metres from the ward. I am not sure anyone would describe Hamlet Court Road as a leafy suburb although I am a fan of my home town of Westcliff-on-Sea.

I am often out and about walking the ward (and other bits of the borough). I have a pretty good track record as regards to speaking to residents.

I have never declared a preference for open borders, and whilst a Labour loyalist I did not vote for Corbyn in either of the two leadership contests that he was involved in. 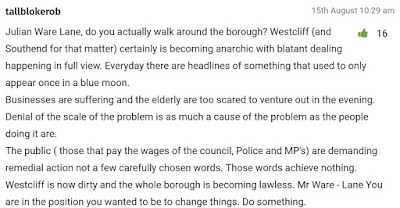 I have lobbied for extra policing, and have been a long way from quiet as regardless to the issue of crime,

Crime is on the rise and I am trying to do something about it. I have had four attempts to get into Parliament, for it is there that decisions about policing, as well as the support services that address the underlying causes of crime, are made.