Saved, for now, but we should remain cautious and vigilant


I welcome Conservative U-turns on the NHS and their warm words as regards to accident and emergency provision at Southend University Hospital. This is too important an issue to ignore any support, even those joining at the eleventh hour. However, I warn against complacency as the plans to downgrade A&E provision in Southend were in response to budgetary pressures, and the need to make cuts is still there. 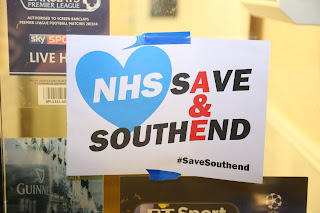 The Government is intent on continuing its austerity agenda, an agenda that has run for seven years so far. This agenda sees pain for public services and for those who depend on them. It means that the hospital has to make some enormous cuts, and if A&E has been saved, is this at the cost to some other service?

I have been involved in the Save Southend A&E since its inception, and proudly so, and I take some satisfaction from our apparent victory.

During the recent General Election the battle to preserve this valuable local service featured in the campaigns of both local Labour candidates, of both myself and Ashley Dalton. The Southend West Conservative candidate was forced, effectively, into signing our petition; whereas the Conservative in Rochford and Southend East chose to defy his residents (and somehow then claim credit for saving Southend's A&E).

Of course, whilst Ashley and I led our respective campaigns and made our voters aware of what was going on, we were ably backed by an unsung army of activists and volunteers who helped spread the word. Our success was their success too. The success also belongs to the people of Southend.

So, we cheer that we have had assurances about Southend's A&E, but we do not rest. We know that local public healthcare is under attack from this Conservative Government, and they can only be stopped by the vigilance of campaigners and the public.

Email ThisBlogThis!Share to TwitterShare to FacebookShare to Pinterest
Labels: Save Southend A&E