The old ABC cinema, as I would call it 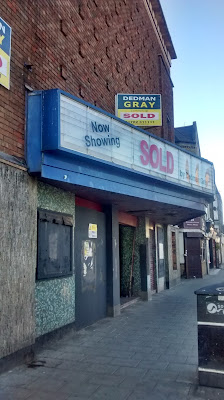 I cannot claim to be a fan of an awful lot of recent development in Milton ward. Much is ugly, more is out of character with their surroundings. Some is poorly designed, and looks like it won't survive many years. Some developments manage to tick all these negative boxes.

Much of Milton ward is covered by conservation areas, much more is worthy of conserving. The place abounds in heritage architecture.

Some buildings are not worthy of preserving though. This may be due to disrepair, or just that they have little architectural merit. It also has to be acknowledged that you just cannot stop all attempts at updating and modernising the area.

I have fond memories of the ABC cinema in Alexandra Street. I recall, for instance, celebrating my twenty-first birthday there watching The Elephant Man. I never went to the place when it became the New Empire Theatre.

It has lain empty and neglected for quite a few years now. It has suffered as a result. It is a bit of an eyesore now. It has been bought, and I cautiously welcome plans to develop it. Cautious because I have only vague details of what is being proposed for the site. It is a prime site, close to the Clifftown Conservation Area, a beautiful part of central Southend-on-Sea, and I would hope that whatever replaces the old cinema at least attempts to keep to the character of the area.