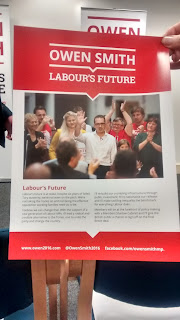 Friday night in glorious Basildon. I really like Basildon. It just feels like a political homecoming for me.  I began my Labour activism here in the run-up to the 1997 General  Election and have spent many happy hours here helping wonderful Labour colleagues. I just love it; it feels like natural Labour territory, a place where we can win.

I once fought a council seat here: Nethermayne in 2007. I have helped out in many elections, both for council seats as well as Parliamentary contests.

So, to the Council offices in the town centre - Owen Smith was in town. Owen,  who I hope will be leading the party soon.

I am not sure what I expected. I was pleasantly surprised by the turnout. My guess (which is often a shaky estimation) put the audience at around 120. I certainly saw many familiar faces.

Owen was impressive, and whatever the outcome of the leadership contest he certainly looks to have a bright future.

It strikes me that whilst Jeremy Corbyn certainly enjoys solid support amongst ordinary members, amongst activists, especially those who hold council and Parliamentary seats, it is Owen that is ahead.

This suggests that those who know what it takes to actually win elections are backing Owen.  Will it take a succession of defeats before Jeremy's fan club realise what his leadership means for Labour?