Premier Film Screening: The Hungarian Community of Southend Commemoration of the 1956 Revolution and Independent War 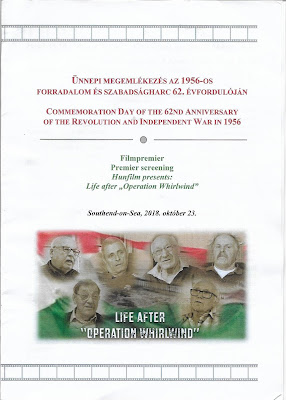 I popped along to the Beecroft Art Gallery this evening to see a film on the 1956 Hungarian uprising. It was also an opportunity to network and try a few Hungarian cakes. (Cake is always welcome).

I did not count the number of attendees, but I reckon something like 50 - 60 persons were there, and it was a very friendly occasion. It was a mix of young and old.

The event was bilingual, Hungarian and English.

The film was very good, a series of interviews with a small group of men (only men, no women for some reason) who were in Hungary in 1956, and fled to the UK just after. There was archive footage too. Many settled in Southend-on-Sea. The UK has been welcoming to refugees over the years, something we all should be proud of.

Southend-on-Sea has a small but thriving Hungarian community. I vaguely recall Hungarian neighbours when I was a child living in Fairfax Drive.

Although the events that this film celebrated happened 62 years ago it is still very fresh to some, and those who have Hungarian heritage it is a reminder of the yoke of Soviet Communism that hung over Hungary and Eastern Europe for 44 years. It was at times quite emotional, but there was laughter also (especially when describing their first experience of British food).

I am very pleased I went.